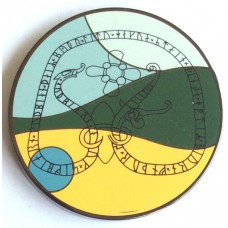 The idea for this coin was to make a rather simple design and turn it to get different sceneries: a forest, a field, a campfire and the sea. On top of the sceneries are prints of different petroglyphs from my area. The backside is from a gilded clasp fro the 8th century found of Gotland, showing characteristic animal ornaments.

This version, "A bountiful land" shows fields, a small lake and forests in the back. I was thinking of the fields and the bays of the Baltic sea in the southern parts of our muncipality. This rune carving is the most classical of the carvings, it is found in the northern parts of the muncipality on the shore of lake Mälaren. It ws a place many people passed by boat from Birka and Sigtuna to the Baltic sea.

The carving says "Ödbjörn and Sigbjörn and Gudbjörn, the brothers, had this stone carved after Björn, their father." The carving is from the 11th century

There is a cache at the carving, Runsten Kiholmen (GC2JG1K) You can see some photos of the carving in the logs.


Your Review: Note: HTML is not translated!

Enter the code in the box below: